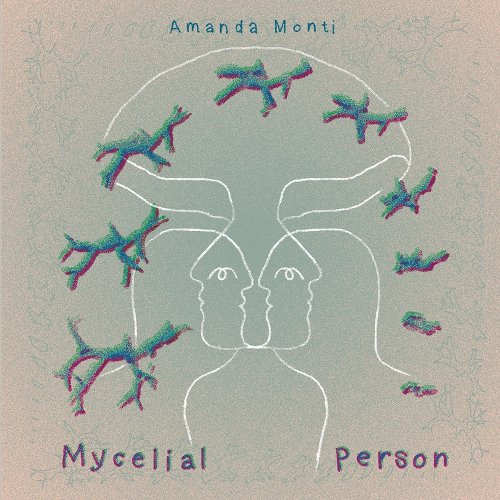 If you’ve ever encountered them in the wild, you would know that Amanda Monti has a speaking voice that can regenerate lapsed ecosystems. It is a voice that, when amplified through terrarium speakers, encourages rare orchids to better absorb nutrients from the soil. At once amniotic and astute, they resonate with ancestral calm, casually imparting revelations on the secret life of plants. Sonorous, photosynthetic: they manifest as an omniscient sapling, a somnambulist with two green thumbs. So potent is their cadence that it once inspired over a hundred Zoom party participants to fondly gather and stroke whatever shrub, fern, or cruciferous vegetable was readily available. “PLANTS OUT FOR AMANDA!!!” the pandemic-weathered masses chanted, while ravaging their radishes, and fingering their ficuses. This impromptu display of horticultural opulence was not uncommon: it was exactly the type of blithe interspecies canoodling that Monti encourages on a regular basis.

Although most prevalent in their radio work, Monti’s undulating, Germanic intonation ripples pensively across disciplines, encompassing precocial divination, post-coital ASMR elegy, and the puckish ecopoetics of their debut collection Mycelial Person, of which I can only hope an accompanying audiobook is imminent. Moving past my initial preoccupation with the “sporacular” aspects of Monti’s reflections on modern queer ecologies, we are sent gently foraging through a text that has a deep and enveloping network of roots (or, more accurately, hyphae, lest I be reprimanded by my peers in the field). At the beginning of this efflorescent tripartite structure is a candid proclamation:

I wanted to become a mushroom.

I put an ad on Craigslist.

“Will you help me build a mushroom hat in exchange for a palm reading?”

The mushroom that is first offered to the reader is ostensibly mimetic, a crowdsourced means of transubstantiation. The replies to this initial request are fluidly dispersed throughout the remainder of the text. Epistolary fragments burble to the surface of the primordial broth Monti is stirring; anonymous and callous refusals, offers of salvaged materials like old umbrellas, and numerous delayed attempts at a rendezvous. This request is not merely a flight of whimsy, or a bout of cyber-ennui: it is a genuine attempt at collaborative immanence, a paralinguistic method of comprehension. Through unorthodox systems of somatic inquiry and subliminal ritual (automatic drawing, sound walks, fortune telling) Monti drifts between the rigid taxonomies imposed by socialized biology and standardized language, positing an evolutionary trajectory that exists beyond the corporeal. I’m reminded of a quote by the late great Trish Keenan, founding member of the beloved retrofuturist psych-pop ensemble Broadcast. In a 2009 interview with The Wire, Keenan states that “For me the paranormal is the most powerful when it’s unassuming…” and continues to discuss her formative artistic experiences with synchronicity and coincidence. Monti mines a similar interconnectivity here, as Mycelial Person reveals itself to be a lysergic thicket of rhizomatic forms and elliptical patterns that coalesce to illuminate the amorphous thresholds of gender, desire, and coexistence in a world mired by environmental precarity.

Words and sentiments reconstitute on both the quotidian and the molecular level; what first appears as a winsome tangent reveals itself to contain a protozoan instinct, a mischievous tendril that twists through seemingly unrelated hierarchies of sentience. There are radical feats of cross-pollination that first present themselves as plainly as grocery lists: an idle afternoon in a Ridgewood community garden courtyard soon becomes rapturous, inviting transmissions from interplanetary pastoralias. A childhood recollection of the iconic video for “Wicked Game” by Chris Isaak, which featured stark black and white photography, hypnagogic cloudscapes, and a steamy chiaroscuro romp on the beach with Danish supermodel Helena Christensen, becomes a parable about the impossibility of gender amidst its most widely reified and disseminated conceptualizations. Throughout Mycelial Person there is a recurring porousness in both form and narrative, deft textural fluctuations that exalt the often unsung virtues of mutability. Any phrase could at first be stippled and then later smattered, smeared like watercolors, flung back into the slipstream, and reprinted in an act of typographic mutiny. This is poetry as patchwork and splice, as plant cuttings surreptitiously pilfered from Polish restaurants. Here the inevitable voids of translation, the myriad failures of the effable, become a source of untapped gnosis. It is fitting that in one correspondence Monti asserts, “Funny enough I was born into a story with many holes.”

Within this hole-istic saga of mycophilic actualization there is a palpable longing to navigate the permeable membranes of queer community through interdependent networks of care and serenity. This urge materializes in a series of verdant, circuitous aphorisms that read like passages from a cosmic Farmer’s Almanac, or a seance channeling Jacques Cousteau:

Planetary bodies, like shrimp, change gender in other languages.

In their quest to decentralize stagnant modalities of logic, Monti toys with the sanctity of the scientific method, introducing untamed variables and algorithmic aberrations into what would otherwise be staid documentations of data. This emphasis on playful deviation yields everything from Dadaist field notes to shimmering auto-ekphrastic bricolage, and in the case of the following excerpt, poignant meditations on universal consciousness:

Spores are little units of could-bes. They could become a complex organism. Or they could remain unicellular. Some spores can float up to mountaintops. Others can fly as high up as the stratosphere. In the stratosphere they get a little lonely because it’s cold and not as good as a forest, so they huddle together. This is why when humans look up at the moon, sometimes we will feel all the things that could be.

It is refreshing to engage with a lexicon that is simultaneously spectral and sensate, that revels in focused placidity, in ambient growth, while managing to circumnavigate the mawkish, “tenderqueer” affinities that have often characterized poetry concerned with the mycological turn. Monti is at times a benevolent yet probing extraterrestrial, at other times a droll astral prankster, rejecting the matriarchal assignations so typically ubiquitous in depictions of nature, while openly ruminating upon their mother’s legacy of witchcraft. While not explicitly geared towards the hallucinogenic, Monti’s book is in fact an actively psychotropic tome, a mandrake root pulled from a roiling heap of microplastics, a changeling festooned in black truffles. Mycelial Person is guaranteed to dilate your pupils, heighten your proclivity towards synesthesia, and perhaps persuade you to spend “seven days navigating the city led by its weeds.”

Mycelial Person is currently out via Vegetarian Alcoholic Press.