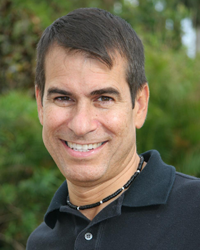 Alex Sanchez, recipient of LLF’s 2011 Outstanding Mid-Career Novelists’ Prize, is best known for his debut 2001 novel, Rainbow Boys, selected by the American Library Association as a “Best Book for Young Adults,” and praised by School Library Journal as a book that could “open eyes and change lives.” The success of that first novel led to two Rainbow sequels and the Lambda Award-winning middle-grade novel, So Hard to Say. His novel, The God Box, explores the intersection between sexuality and spirituality. And his novel, Getting It, a sort of “queer eye for the straight teenage boy,” won the Myers Outstanding Book Award for Human Rights. Alex’s last novel, Bait, won the Florida Book Award Gold Medal for young adult fiction and was recently selected to receive the Tomás Rivera Mexican-American Children’s Book Award. His newly-released novel, Boyfriends with Girlfriends, focuses on bisexual teens. Alex received his master’s degree in guidance and counseling from Old Dominion University and for many years worked as a youth and family counselor. He divides his time between Florida and Thailand.