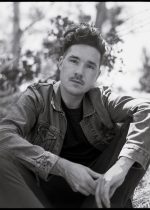 Amos Mac is an artist living and working in Hollywood. In 2009 he founded Original Plumbing, the seminal print magazine documenting the culture of trans men. He was a producer for the Emmy-nominated series Gaycation, has been honored on the OUT 100, TRANS 100, and featured in the HBO film The Trans List. The Original Plumbing Anthology, featuring the best of all 20 issues, will be published by the Feminist Press in 2019. Amos is writing the young adult novel he needed as a kid.