Lambda LitFest is back for its fourth year with a week-long festival that will celebrate and defend Black LGBTQ lives. Join over 20 BIPOC LGBTQIA+ writers in conversations on art-making, joy, and how to dismantle a white supremacist, ableist, cisgender, heteronormative world. The events include ASL interpretation and recordings are closed captioned.

Lambda LitFest is supported in part by an Arts Grant from the City of West Hollywood, as well as support from the California Arts Council and the Los Angeles Department of Cultural Affairs.

Join us for a discussion on Black Joy, how it is vital to the health of Black LGBTQIA+ communities, and how happiness can be celebrated in Black art.

Nicole Shawan Junior is a black, queer and poverty-born counter-storyteller who was bred in the bass-heavy beat and scratch of Brooklyn, where the cool of beautiful inner-city life barely survived crack cocaine’s burn.

Roger Q. Mason (he/they) is an award-winning writer, performer and educator known for using history’s lens to highlight the biases that separate rather than unite us.

Jordyn Jay is a community organizer, arts advocate, producer/director and the Founder and Executive Director of the Black Trans Femmes in the Arts Collective (BTFA).

George M. Johnson is an award-winning writer, activist, and bestselling author of All Boys Aren’t Blue.

Juliana Huxtable is an artist, writer and musician working between New York and Berlin.

Marrion Johnson is a Black, queer writer, storyteller and communications strategist, based out of Oakland California.

Hear from what happens behind the screen in a time where “diversity” is a slogan, but not necessarily an integral part of how the industry functions. This is a conversation where Black and POC industry professionals will discuss re-imagining the future of Hollywood and how they are manifesting their dreams as BIPOC LGBTQIA+ writers.

Steve Harper currently serves as Supervising Producer on the CW drama Stargirl and has written for God Friended Me on CBS, ABC’s American Crime, the USA Network’s Covert Affairs and created the Emmy nominated web series SEND ME.

Taneka Stotts is an Emmy-nominated Television Writer who has worked on the animated series My Little Pony: Pony Life (Hasbro), Steven Universe Future, and Craig of the Creek (Cartoon Network).

Darnell L. Moore is the author of the 2019 Lambda Literary Award-winning memoir, No Ashes in the Fire: Coming of Age Black & Free in America, which was listed as a 2018 NYT Notable Book and a Barnes & Noble Discover Great New Writers’ pick; he is the Director of Inclusion Strategy for Content and Marketing at Netflix and currently at work on his second book, which is tentatively titled, Unbecoming: Visions Beyond the Limits of Manhood.

Hear what it means today—right now—to be a BIPOC LGBTQIA+ writer and activist within a white supremacist cis-gender heteronormative dominated world. This is a conversation where panelists will share what activism & writing means to them as BIPOC LGBTQIA+ creators.

Kai M. Green is a writer, poet, filmmaker, and scholar. He is currently working on a memoir entitled, A Body Made Home. He is an Assistant Professor of Women’s, Gender, and Sexuality Studies at Williams College.

Ianne Fields Stewart (pronouns: she/her/they/them) is a black, queer, lesbian, and nonbinary transfeminine New York-based storyteller working at the intersection of theatre and activism, and the founder of The Okra Project and co-organized Brooklyn Liberation: A Rally for Black Trans Lives where she delivered a speech in front of 15,000 people who gathered to march for Black lives.

Zach Stafford is an award-winning journalist who recently served as the editor-in-chief of The Advocate and host of the morning show AM2DM.

A panel where there are no rules or norms to follow. Panelists are free to say what they want about sex and the body without censorship. This is a conversation where BIPOC LGBTQIA+ writers will share how sex & body politics manifests in their writing.

Brontez Purnell is a 2018 Whiting Award recipient for Fiction- his work weaves sustained narratives of sex and desperation punctuated with triumph.

Kenyon Farrow is a writer and activist, splitting his time between NYC and his hometown, Cleveland, OH.

KOKUMO, the Queen of Queer Soul, is a legendary, award-winning musician, poet and activist.

Nahshon D. Anderson is a creative non-fiction writer from Altadena, California and is author of forthcoming memoir titled Shooting Range.

Randa Jarrar is the author of the forthcoming memoir Love Is An Ex-Country, the novel A Map of Home, and the collection of stories Him, Me, Muhammad Ali. 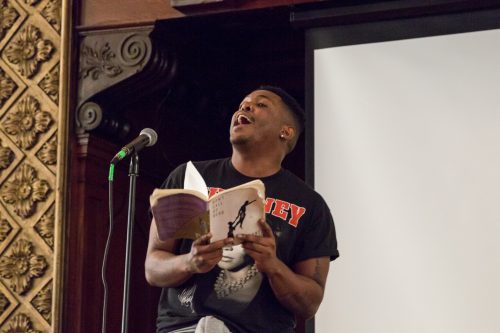 Lambda LitFest is supported by: